New research* from the UK’s leading insurance premium finance company, Premium Credit, shows more than two out of five SMEs have seen insurance bills rise in the past year adding to the financial pressures they are battling.

Premium Credit’s Insurance Index, which monitors insurance buying and how it is financed, found that 42% of firms say premiums have increased with 7% of SMEs reporting dramatic increases. Increases in premiums has led to one in six (17%) making cuts to the business while 11% have cut back on investment in the last two years.

More firms are turning to credit to ensure they maintain important cover, the research shows. Around one in four (24%) say they have borrowed more in the past year to pay for insurance which is an increase on the 21% who said they had borrowed more when Premium Credit ** last reported on the issue in May this year. Around 35% say they are borrowing the same amount as last year and 23% say they are borrowing less. That compares to 37% and 24% respectively in May’s Premium Credit Insurance Index.

The increased borrowing has meant financial strain with SMEs facing a range of other pressures – around 14% say their firm has defaulted on repayments in the past year while 15% believe they might miss payments in the year ahead.

The increases in insurance premiums hitting businesses in the past two years has meant 10% of SMEs have increased the excess on one or more of their insurance policies and nearly one in ten (9%) have reduced the level of cover they have. Around 9% have cut jobs while 8% have cut back on pay increases and salary bills.

The table below shows the percentage of SMEs who use credit to buy insurance and which products they use it for. 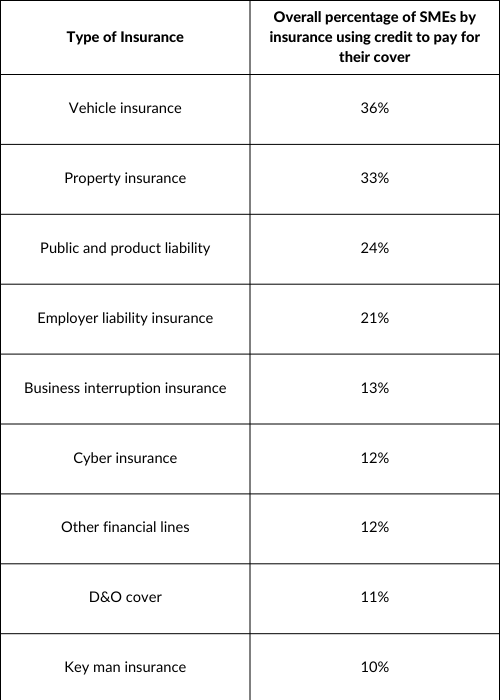 Premium Credit’s research shows the impact of not having insurance for SMEs – around 11% say they have suffered damage they could not claim for because they did not have insurance, or their cover was not good enough. For 81% the damage was worth £1,000 or more.

Owen Thomas, Chief Sales Officer at Premium Credit commented: “Businesses are facing a series of financial shocks with increasing insurance premiums adding to the pressure from rising energy bills and worries about an economic slowdown. Credit continues to play an important role in ensuring all businesses can continue to afford insurance which is often vital to the continuing success of their businesses.

“Our existing support for vulnerable customers is tried and tested, and we are reviewing what additional support is appropriate during this time of uncertainty.”