More insurance customers using credit to buy their cover are increasing the amount they borrow in response to the cost-of-living squeeze and rising premiums, new research1 from the UK’s leading premium finance company, Premium Credit, shows.

Its study (1) found that one in three (34%) customers who use some form of credit to pay for one or more insurance policy borrowed more than they had in the previous 12 months for this purpose.

That is an increase on the one in four who said they had borrowed more in the previous 12 months when Premium Credit’s Insurance Index last reported (2) in October 2021. However, the data shows the number of people using some form of credit to pay for one or more insurance policy dropped slightly from 69% to 66% over the same period.

The main reason for increasing borrowing identified by the research among those who use credit to buy insurance is rising insurance premiums – around 27% blamed increases in the cost of cover for their need to borrow more. Nearly one in four (23%) said they borrowed more because credit is cheaper while the same number boosted borrowing because their income has fallen and 6% because they lost their jobs.

Around one in twenty (5%) who used credit to pay for one or more insurance policy said they had defaulted on repayments during the past year while the same number think they will miss repayments in the year ahead.

Premium Credit’s Insurance Index, which monitors insurance buying and how it is financed, found credit cards are the most popular form of borrowing with 35% using them compared with 27% who rely on finance offered by their insurer and/or premium finance. Nearly one in ten (9%) use personal loans and 7% have borrowed from friends or family.

Premium Credit is advising customers to consider premium finance which, for a small charge, enables them to pay monthly for cover instead of in a lump sum. Spreading payments in such a way can help ease cash flow challenges and make paying for vital insurance simpler.

Its study shows widespread use of credit by consumers, as the tables below demonstrates.

“Premium finance has become a very cost-competitive means for consumers to buy insurance and better manage their finances through spreading payments. At a time when household finances are under pressure it can be a good alternative to other forms of credit.”

Premium Credit’s research highlighted the cost of not having the right insurance – around one in twelve (8%) of those who use credit to pay for insurance have not been able to make claims in the past five years either because they had no cover or had inadequate cover. Nearly half (47%) of them lost out on claims worth £1,000 or more.

(1) Independent consumer research conducted by Consumer Intelligence among a nationally representative sample of 1,026 aged 18-plus between March 11th and 13th 2022

(2) Independent consumer research conducted by Consumer Intelligence online among a nationally representative sample of 1,017 adults aged 18-plus between October 1st and 4th 2021

(3) Independent research conducted by Consumer Intelligence online among a nationally representative sample of 1,014 adults aged 18-plus between March 26th and 29th 2021 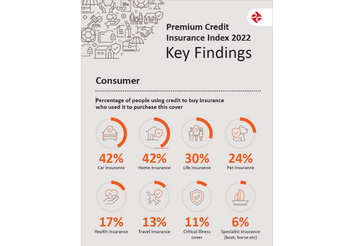